When my daughter was born, we lived in a boathouse.  Not a houseboat.

(I had a long argument with my first grade teacher about this)  Shacks that people stored boats in around the prohibition period. They were built out on a wooden pier over the bay. When they took the boats  out for the summer, they moved in a bed, a lot of beer, and a toilet on top of a hole in the floor. (They’ve been somewhat upgraded since then. But not a lot.) Did I mention the beer? 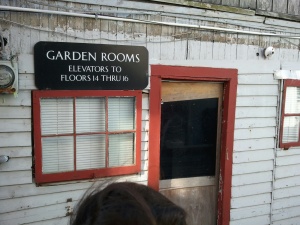 Whaddya want? They’re BOATHOUSES for crying out loud. They’re quaint. Rustic. And this is also the day after the hurricane.

Then we moved into a warehouse. Just down the street. It used to be the Evening Star Yacht Club. It was still just a big warehouse with a bunch of sailboats in it. So we built an apartment in it and lived there.

The warehouse was on a marina. When my daughter was about ten she put a sign in the marina store that said

“Hypnotist: 2 hypnotisms for 75 cents.”  And she got customers.  She hypnotized boat captains.

My father lived next door in what we called the Little House, which was not small, but was to distinguish it from the Big House, which was not big, right down the street. He had a pet seagull named Jonathan (for Jonathan Livingston Seagull) which being hand fed by my dad grew to be as big as a turkey.

He went out in the morning with food and cawed to call him. So imagine the seagull on the far right, only an old guy with a resemblance to Abraham Lincoln.

He would sit on my dad’s car and crap on it mightily. My dad moved his car two buildings away. The seagull was found on it every morning.

My daughter randomly mentions these things to people. They don’t believe her. I can see why.